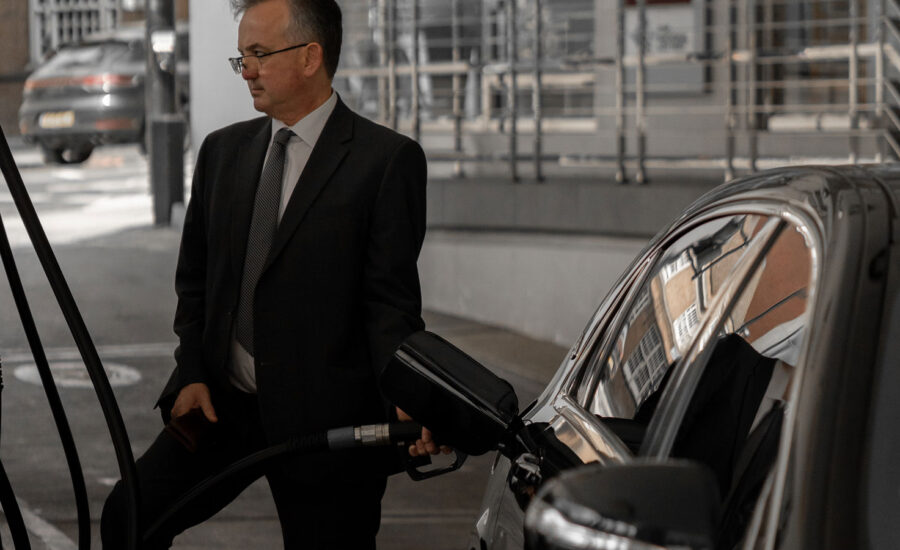 Making Sense of the Markets this week: June 26

Photo by Krzysztof Hepner on Unsplash

It was the week of April 3, 2022, when I signed off from writing the “Making sense of the markets” column. It is wonderful to be back filling in for Kyle Prevost (he’s on vacation), who took over the column. Kyle’s insights and writing give the column a nice jolt. I am so glad to see it in good hands.

Check out that April 3 column. I covered some of the major investment themes and ideas I put on the table. Many investment opportunities were identified, and they played out in our favour.

So, what the heck has been going on these days? Not much. Or let’s say that not much has been working on the investment front as of late. Stock markets, bonds, commodities, gold, bitcoin, and even oil and gas stocks have been falling over the last few weeks.

It’s all about inflation.

In this column I’ve long identified inflation as a nasty beast—and a threat. Inflation has been ramping up around the world. Very few investors are familiar with inflation. You’d have to be on the far side of 70 to have experienced the stagflation of the ’70s and early ’80s. I’m happy to have introduced the possibility and portfolio inflation-antidote to MoneySense readers.

Once again, the best inflation-fighters are commodities and energy stocks. And when you build an all-weather portfolio, you will include inflation protection.

In May 2022, I did a comparison of the MoneySense core couch potato ETF models versus the advanced spud (all weather) models. To no one’s surprise, the advanced models have been outperforming.

Over the past few weeks not much is working on the investment front, as we may be staring down the choice between a recession or stagflation.

More Canadians think we are heading for a recession. This is according to YahooFinance!:

“But most Canadians are not convinced that the Bank of Canada’s plan will work to tame inflation. The poll found that a majority (56%) are concerned that rising interest rates will plunge the country into a recession, while 44% say that the rate hikes will cool the rate of inflation and avoid a recession.”

Central bankers in Canada, the U.S. and around the world are taking on the inflation fight earnestly. They are raising rates in the attempt to whack consumers so  they stop buying as much stuff and spend less on travel. In Canada they’d like to see a cooling of the red-hot housing market, too.

In two decades during which rich-country property prices soared, it's interesting that even ten years after its own massive property bubble began to deflate, Japanese prices were still declining for another decade or two. Real estate bubbles can take a long time to adjust. pic.twitter.com/klS1rnJ1uX

Stocks are getting hit due to recession and stagflation fears. Bonds take it on the chin due to the rising rate environment. As rates rise, bond prices fall. And energy stocks and commodities will fall in anticipation of a weaker economy.

That said, nobody knows how this will all play out. That’s why we see all of the asset classes flailing about these days. We could get a recession, stagflation or even a soft landing. That’s to say, the central bankers could cool off the economy just enough to bring inflation down without spooking the consumer enough to cause a recession. That favourable result would be a soft landing. But soft landings are very rare.

On my own blog, I wrote:

“Many economists and market experts are suggesting the outcome for 2022 and into 2023 might be that we experience a recession or stagflation. That’s not a good choice we might think. And of the two ‘options,’ we might prefer a recession. A recession might do enough to quell inflation. And we do have to stomp out inflation hard the first time. That is: central bankers have to raise rates aggressively enough to hurt the consumer enough to reduce demand and get inflation well under control. If they let inflation fester, it may resurface and cause even more trouble as it did in the 1970s stagflation era. Recession or stagflation, who knows what we will get. The idea is to be aware and prepared.”

The choice may be between a recession or stagflation. We have already entered a stagflationary environment (with high inflation and declining economic growth). The question is, where do we go from here? Do we leave stagflation behind?

Canada and the Canadian consumer are more rate sensitive compared to the U.S., as we are carrying much more personal debt. It will not be hard to break the consumer nor the real estate market. We might even be twice as sensitive as those south of the border.

Again, look to those all-weather portfolio models. If you are a retiree or near-retiree, be prepared for anything. If you are in the accumulation stage, you are being offered lower prices. Add new monies and reinvest portfolio income on a regular schedule.

All Canadian investment sectors are down year-to-date—except for energy. The oil and gas sector has performed very well because of a supply shortage. Goldman Sachs increased its Brent oil price forecast by US$10 to US$135 a barrel for the second half of 2022 and into the first half of 2023.

Supply just cannot keep up with increasing energy demand. Energy companies have little incentive to make major investments. There may be some tweaks along the way to increase production in modest fashion. But given the global desire and need to shift from black (oil) to green energy, oil companies will be reluctant to step up in any meaningful way.

The oil companies will pump and print. They are incredibly profitable. They will produce oil and gas and return value to shareholders by way of generous and growing dividends and share buybacks.

In fact, in early May, I took all of my handsome profits from iShares Capped Energy Index ETF (XEG), and the Ninepoint Energy ETF (NNRG) and moved to an energy dividend approach. 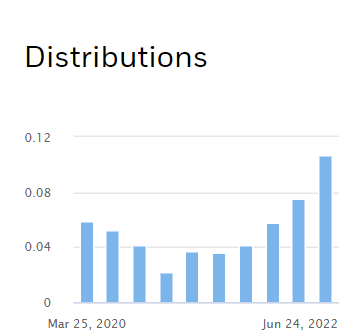 In the above chart, we can see the growth in the energy index distributions. I am more focused on dividends by holding only generous dividend payers and companies that have suggested they will be paying special dividends.

I’ve traded energy stocks’ price risk with dividend health risk. Being in the semi-retirement stage, that suits me just fine. The energy dividends will more than cover our total gas bill at the pumps. And I did harvest some of the energy stock profits (from those exchange-traded funds, ETFs) to pay for this Summer’s driving needs. We are currently down east.

We should always remember commodities are cyclical, and it is important to rebalance and take profits at times.

I still like the prospects for the oil and gas sector. So does Warren Buffett. As the world’s greatest value investor, he is buying all of the Occidental shares he can get his hands on. It was recently reported that Buffett bought another 9.6 million shares of Occidental Petroleum (OXY) over the past week, raising its total holdings in the stock to 16.3%.

After six-straight winning months, WTI (West Texas Intermediate) is down about 9% for June, while Brent is down nearly 11%. Worries of global monetary tightening causing recessions are fueling a demand destruction narrative in commodities.

Energy is a major contributor to inflation, and the inflationary pressures seep into many industries. I’m happy to not have to worry about the price at the pumps. And the energy stocks offer an overarching inflation hedge. My position is near a 10% weighting, not including my pipeline stocks Enbridge (ENB.TO) and TC Energy (TRP.TO).

Big moves in the telecom sector

Telus (T.TO) has signed a deal to buy LifeWorks Inc. valued at $2.9 billion including debt.

That is a major move for this very entrepreneurial telco company. I call it “a boring telco with a growth kicker.” I hold Telus and Bell (BCE.TO).

It was back in March, I reported on Rogers’ planned acquisition of Shaw Communications. It eventually had to hang up on the Cogeco deal.

The Shaw deal has been challenged due to the need to satisfy regulators. One sticking point may have been solved. Rogers has lined up Quebecor to take the discount operation Freedom Mobile off of their hands.

What’s up and down with bitcoin?

In January 2021, I wrote a column that defines the term “bitcoin.” To my eye, it is digital gold. We might call it “modern gold.” And it is superior to gold in many ways, thanks to its ability to exchange bitcoin in a near frictionless manner.

And certainly, bitcoin had demonstrated that it is not a short-term inflation hedge,

Personally, I like bitcoin as a portfolio asset. There’s no difference to holding gold, commodities, stocks, bonds and real estate investment trust (REIT). You buy and hold, add and rebalance within the total portfolio.

The key to any ongoing bitcoin adoption is scarcity and trust. There’s no problem on the scarcity front versus fiat currencies (the U.S. and Canadian dollars for example).

Where bitcoin is having some trouble these days is with the trust factor. It’s been on a wild ride (as promised). 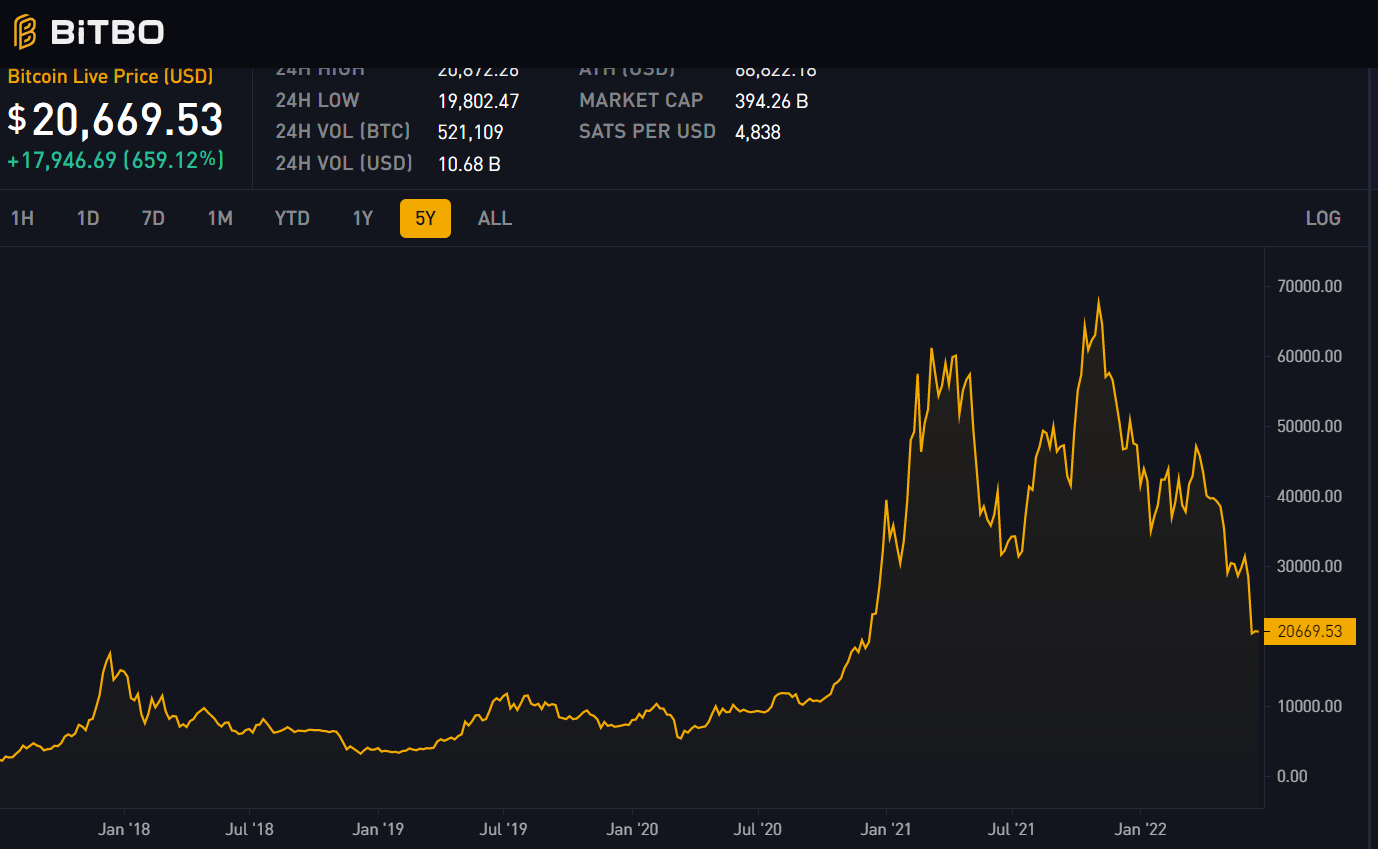 Back in January 2021, I wrote on MoneySense.ca:

“Despite the jaw-dropping overall gains over time, bitcoin is incredibly explosive and incredibly volatile. To come up a winner, one would have to be prepared for some violent moves to the downside.”

Bitcoin offered a couple of spikes into the US$60,000 area and then topped out above US$67,000. In 2022, the price has fallen in sympathy with stock markets and especially other higher risk assets.

“Bitcoin/crypto is a very long duration asset and is subject to changes in the market’s discount rate. Depending on how you might measure that, the market’s discount rate has gone up three- to ten-fold since November, so all discounted cash flow assets go down in proportion to their duration. Longer duration is down more. Crypto, like big tech growth, has no ongoing cash flow but rather promises to pay some lump-sum growth in the future.

In an email exchange, Mike shared that we are unwinding the animal spirits, and he’s surprised the price is not lower. But that speculative frenzy may have been cleansed.

“The recent selling by bitcoin miners—who pay their bills in dollars—created a cascade in pricing and has wiped out almost every leveraged position along with hedge funds and many DeFi projects. This is a very good thing, as it’s a Ponzi should anyone promise/think they can lend at 20% returns with no risk. The scammers and speculators are for the most part wiped out.”

Philbrick also suggested that these 70% corrections should be expected. They are a feature, not a bug…. REBALANCE!!! And your portfolio position size needs to be small enough in a portfolio that you can stick to your rebalancing schedule without wavering.

Know your tolerance for high volatility assets. If history repeats, even a 2% to 3% weighting would have a meaningful impact. Of course, this is not advice.

Bitcoin is the most free market macro asset we have.

It has come down 70% in anticipation of tighter financial conditions.

But bitcoin still up 300% since pre-pandemic.

I continue to hold in my registered retirement savings plan (RRSP) and have been building a position in my tax-free savings account (TFSA).